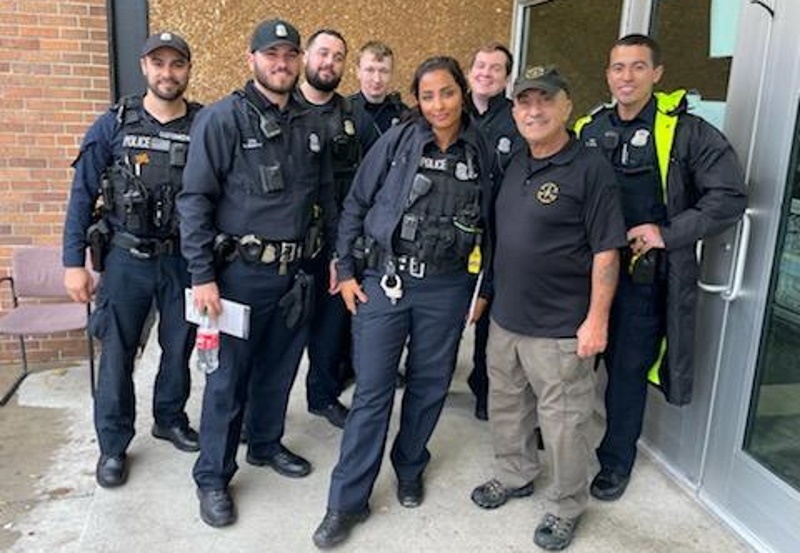 From Florida to Detroit, a drive of more than 1,200 miles, wasn’t too far for Emery Esse to make to share the Word of God on Thin Blue Line Shields of Strength gifts from Point 27 to the 1,200 members of the Detroit Police Department this month.

“All were happy to receive them and some would even ask for extra for their children and wife. I personally shared Christ with a few,” Esse said.

“God is sending me! I am in his grip. Romans 8:31 ‘What then shall we say to these things? If God is for us, who can be against us?’” These are Esse’s words about his call to share the gospel with law enforcement (LE) officers.

Esse’s passion is unstoppable as is his witness of God’s incredible power–especially since Esse was born and raised a Shiite Muslim.

Esse, his grown son, Emery A. Esse of San Antonio, and Esse’s brother-in-Christ, retired (after 38 years) Detroit PD officer Don Eastman set out on their journey from Florida to Detroit on September 23.

On September 25: “We visited all the precincts and also my SWAT base to personally hand out the Thin Blue Line Dog Tags, my tract, and books to each officer we came in contact with. We passed out over 1.200 Point 27’s TBL Dog Tags, my story and testimony, and a book titled, ‘Courageous Living Bible Study-Special Law Enforcement Edition,’” Esse said.

“I am doing this to spread the gospel of our Lord and Savior Jesus Christ to my brothers and sisters in law enforcement. God gave me that command and put it in my heart to share His gospel with LE and all He puts in my path. I try to be faithful and caring since He has put that in my heart and given me the wisdom, courage, and love first for Jesus to obey, and for others– specially LE and Military who risk their lives each day. I have been doing that since coming to Christ in 1976.” Esse was 26 at that time.

After Esse’s wife converted to Christianity, he proved a hard sell for years, but then a dream brought him around: “I was in combat running with another Marine. We jumped into a foxhole and landed in hell at the feet of Satan! It was so real to me. Satan was laughing and pulled out a big knife and started stabbing the guy who was with me. I kept trying to stop him, but he would just laugh. I woke up at 4:30 am, got out of bed, and got down on my knees. I asked Jesus to forgive my sins and come into my heart and save me.”

Little did Esse know that real life would later mirror that crucial dream. On that nightmarish day so many years later, Esse and his SRT partner were called to a dangerous scene. Sensing the danger—Esse asked his partner if they could pray before going in to face the gunman. Esse’s partner got angry, but Esse said he still prayed and asked for God’s protection. The concealed gunman shot, mortally wounded and tragically killed his partner.

“Little did my partner know that day that he would face God,” Esse said.

Esse admits that day marked a very dark time in his life, but thankfully God had so many more plans for him.

Esse says he connected with Point 27 and US Army (Ret.) Col. David Dodd about three years ago through a Christian brother. “It was all God who brought us together in His service to spread His gospel throughout LE and Military.

“I have never been stopped from spreading the gospel to fellow police officers, even when I was on the job, because God is with me! He is sending me!”