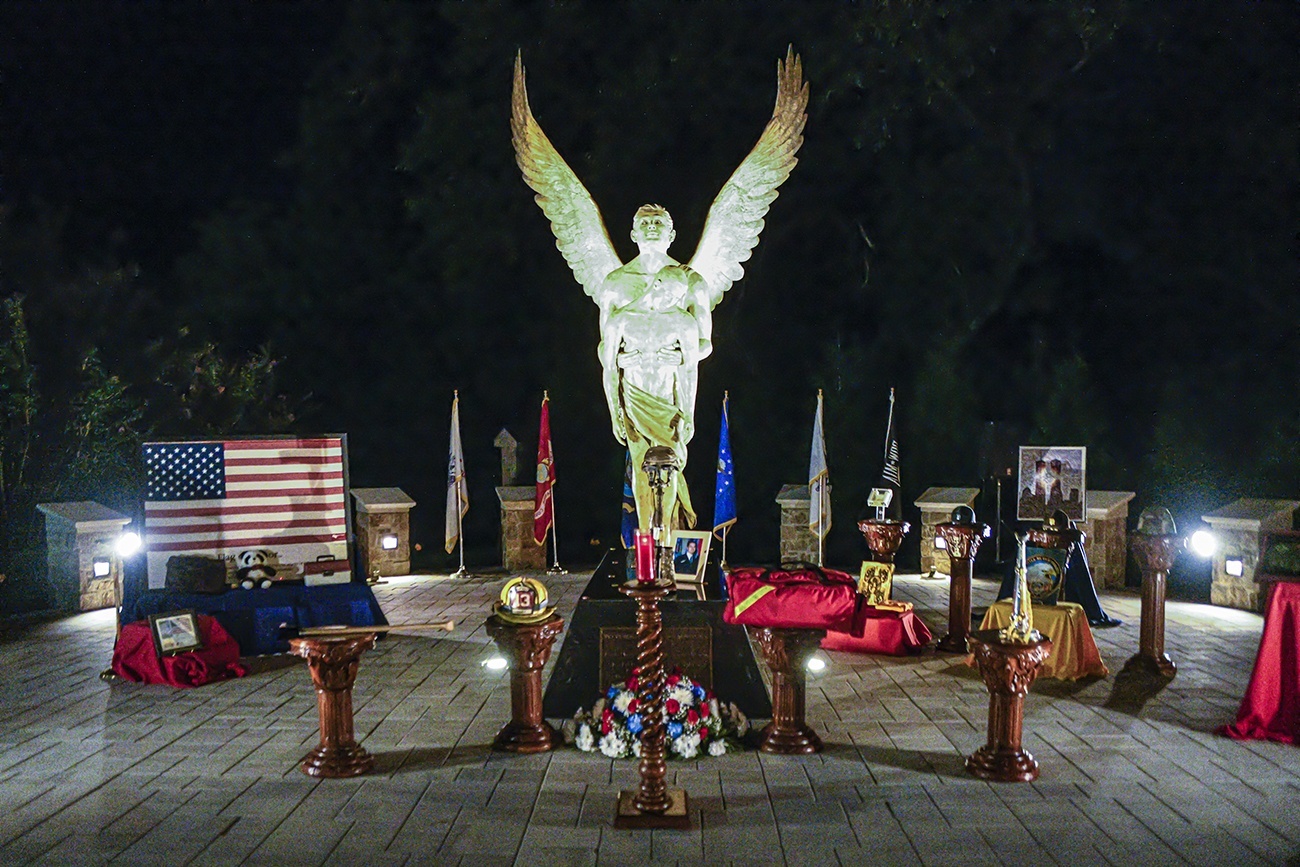 Since World War I, America has acknowledged and treasured Gold Star Moms.

American Gold Star Mothers, Inc. is an organization of mothers whose sons or daughters served and died, while serving their nation in times of war or conflict.

Since Vietnam veteran and professional photographer Patrick J. Hughes connected to Point 27, he’s making sure almost every day is Gold Star Mother’s Day. So far, he has given out two hundred gifts from Point 27 of Folded Flag Pendant Keepsake Necklaces to Gold Star Moms, Wives and Dads all across the country.

Hughes says he sees firsthand and his photographs capture vividly how very much the gifts from Point 27 of the Folded Flag Pendant Keepsake Necklaces mean to Gold Star Mothers.

In the past weeks, Hughes’ photographs have captured the images of God Star Mothers wearing the gifts of Point 27 of the Folded Flag Pendant Keepsake Necklaces at a POW/MIA National Day of Recognition Chair of Honor unveiling in Sea Isle City, New Jersey.

Hughes’ photos capture the poignant image of Judy Faunce, a Gold Star Mother, speaking from a podium in Claymont, Delaware, during a 911 ceremony this year. She is wearing the Folded Flag Necklace in memory and honor of her son, Capt. Brian Faunce, killed in action in Operation Iraqi Freedom, 2003.

Why is this important to Hughes?

“I joined the Marine Corps in March of 1966 and went to Paris Island Boot Camp. In July, 1966, I was sent to Vietnam. In January, ‘67, I got stuck in the Tet Offensive in Vietnam and became a Combat Marine, “Hughes said. “…I proudly served in the United States Marine Corps from July 1966 through July 1968 and in the Republic of South Vietnam from January 1967 through February 1968 with Marine Air Group 12.”

“And, then, through a friend meet up on line with Col David Dodd [I learned] of Point 27: how they honor and help our Veterans [and] Law Enforcement heroes along with a special way to honor Gold Star Families with their beautifully designed folded flag necklaces and dog tags with moving Bible sayings on the backs.

“For over twenty years now I have been involved with our American Gold Star Mothers who have made the ultimate sacrifice of losing a son or daughter in helping to protect our freedoms that are all too often taken for granted by most.

“I believe that God has placed us here to continue his mission of love and compassion for our fellow man. In some small way I try to be worthy of His love by helping others.”

The Folded Flag Pendant Keepsake Necklaces Point 27 gives as gifts to Gold Star Family Members, and families of fallen law enforcement officers are engraved with John 15:13; Greater love has no one than this; to lay down one’s life for one’s friends.”

The thick ¾ inch x 1 ½ inch silver pendant, strung on a sturdy chain, is in the triangular shape of the folded flag which a military or law enforcement family receives in honor of their loved one who gave his or her life in service to others. The face of the pendant features raised stars spaced as in the folded flags. The back of the keepsake is inscribed with the scripture. The pendant, made by Shields of Strength, is made of stainless steel so that it can be a lasting treasure passed down through generations of family.

The name, Gold Star Mothers, was derived from the custom of military families who put a service flag near their front window. The flag featured a star for each family member serving in their country – living members were denoted in blue but gold stars honored family members who were killed while in duty. In 1918 President Woodrow Wilson approved the wearing of black arm bands bearing a gilt star by those who had a family member who died in the military service to the United States. This distinguished them from the blue stars, representing a family member who was serving in the armed forces.

American Gold Star Mothers, Inc. was incorporated in 1929, obtaining a federal charter from the US Congress. It began with 25 mothers living in the Washington DC area and soon expanded to include affiliated groups throughout the nation. On June 23, 1936, a joint congressional resolution designated the last Sunday in September as Gold Star Mother’s Day, a day that has been observed each year by a presidential proclamation and ceremonies across the country.