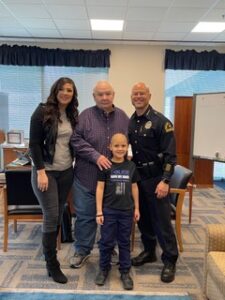 As the National Outreach Coordinator for Point 27, Jerry Rhodes stays in daily contact with an extensive network of police officers and agencies across the nation. But recently his contact with officers has included a request of encouragement for a little boy battling cancer in Texas.

Bennett Hernandez, a 6-year-old Dallas boy diagnosed with cancer, had caught the attention of the retired Dallas Police Detective and 47-year police veteran–and won his heart.

The young boy wants to grow up and become a police officer, Bennett says “to fight the bad guys,” and so, he wore his police officer costume every single day for at least a week to bolster himself in his fight against cancer. The disease had become one of the scariest and most horrific bad guys of Bennett’s young life. While other kids his age enjoyed summer vacation, Bennett spent his time in hours of treatment at Children’s Medical Center in Dallas.

Rhodes was determined to make sure Bennett and his parents wouldn’t be standing alone in this critical battle; and he began recruiting the support and encouragement for Bennett of law enforcement officers across the nation.

The boy’s heroes, the good guys and gals in blue, stepped up, sending love with colorful police patches, coins, hats, shirts, gifts, cards, notes, care packages and letters of reassurance by the hundreds. Even law enforcement officers from other countries joined in the rally of support for Bennett.

Among the well-wishers was a US Congressman, a Texas Congressman, the Director of the US Forestry Service and officers from law enforcement agency in Ireland.

As Bennett and his parents made the drives to and from his treatments and Bennett fought the ravishing effects of the grueling weeks of chemo on his fragile health, Bennett’s focus moved– from the pain, the nausea, the physical discomforts and the fear–to the wonder of surprises he would receive each day in the mail.

Some days Bennett would find more than 20 packages waiting for him—sometimes so many that his energy would wear out long before he could open all of them.

Bennett’s mom Raynie said many of the letters to Bennett were written by people who had fought their own battles with cancer.

So, most recently, when Bennett rang the bell at Children’s Medical Center in Dallas, signifying his last treatment has left him cancer-free, it was as if everyone who had rallied around him during his battle were ringing the bell with him.

Bennett and his parents didn’t fight nor do they celebrate alone, but with a backing of blue with their every step.

“This outpouring of love for a little boy by police officers proves one thing: the Police Badge has a heart, not an ego!” Rhodes said.

This outpouring of love for a little boy also shows the compassionate heart of Point 27 and of those who serve Point 27, like Rhodes—calling faith to action, believing in the power of prayer and believing the scriptures inscribed on the Shields of Strength dog tags—the scriptures that encourage a 6 year old and his parents fighting cancer: that we should be bold and courageous, not terrified or discouraged, because the Lord God is with us wherever we go; and that all things are possible with Christ who strengthens us.
“And even though you may not be a doctor or any kind of medical professional,” Rhodes said, “you can still help someone like Bennett and his parents by your actions. Never look down on anyone,” he advises, “unless you are reaching down to help them.”