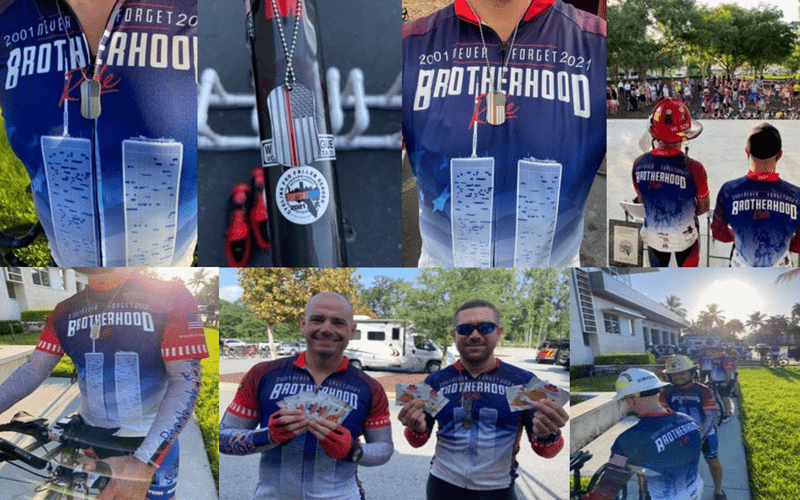 Scores of Fire Fighters, EMS Responders and Law Enforcement Officers – active and retired– set out from Naples, Florida, August 21, on a 1700-mile Brotherhood Bicycle Ride to New York City to honor fallen first responders who sacrificed their lives in the line of duty.

Today—on this 20th Anniversary of 911—after 22 days pushing 70-100 miles a day, they roll into New York City to attend ceremonies at Ground Zero—wearing dog tags from Point 27 that virtually transport every Point 27 supporter and volunteer in journey with them, to remember, to bring honor to the fallen and to stand with them at Ground Zero.

The Brotherhood Riders’ Facebook page https://www.facebook.com/brotherhoodride notes that this year’s ride is dedicated to 26 Florida Fallen Heroes who died in the line of duty in 2020 while protecting their communities and to the thousands of 911 first responders who have died and are dying from 911-related illnesses.

These Brotherhood Ride bicyclists left Naples on Day One of this year’s ride wearing, carrying or embellishing their bikes with gifts from Point 27 of Thin Blue Line and Thin Red Line Dog Tag Shields of Strength Necklaces.

Johnson had been coordinating a gift of 2100 dog tags for the Hillsborough County Sherriff’s Office with Morgan. Morgan said he mentioned the Brotherhood Ride and the pair agreed that Point 27 Dog Tag Necklace gifts would be perfect to encourage the riders on this 911 anniversary and honor them, their ride and the fallen.

Morgan began his law enforcement career in 2007 with the HCSO. He has served in several distinguished capacities, and, like Johnson, continues to train law enforcement officers across the US.

Johnson said in 2019 a former law enforcement officer gave him a Thin Blue Line dog tag.” It was actually my brother-in-law who gave me the TBL tag. Holding that dog tag and reading the scripture on it gave me such an overwhelming feeling,” he said, “…hard to explain but it really brought everything home in a big way.” Those feelings inspired Johnson to become a very dedicated and active Point 27 Outreach Coordinator in Florida. He has also arranged and made several Point 27 gift presentations in Texas and Georgia.

Morgan said, at first it seemed an odd happenstance for he and Johnson to meet. One day, Morgan was handed Rick’s card and so he connected with him.

“Rick began to work with me on arranging a Point 27 gift TBL dog tag presentation to the Hillsborough Sheriff’s Office, now scheduled for this coming October,” Morgan said. When Morgan mentioned this year’s Brotherhood Ride, Rick agreed with him that the dog tags would show support and let each rider know that God was with them… and then it was a “done deal.”

These Florida Brotherhood Rides began in 2007, with about 30-40 cyclists participating every year, according to Morgan. He joined the rides in 2015. This year, because of his work schedule, Morgan said he could only ride nine days, from Naples to South Carolina…to honor the Charleston Nine.

“In the firefighting world, the Charleston Nine are the nine firefighters who were tragically killed in 2007 fighting a horrendous sofa store fire in Charleston, South Carolina,” Morgan said. This fire has been noted as the most-deadly fire and loss of firefighters since 911.

“This Brotherhood Riders group cycles all day, sleeps on air mattresses at night and sometimes spend weeks away from their families,” according to Morgan.

“The most amazing thing is that the majority of the people are not avid cyclists, elite athletes or iron men. They are average Joes [and Jills], but they have truly figured out their ‘why’: to raise awareness, honor and show respect. That is what really pushes them. Three came down to Naples from the New York area to join us…and they were a bit unprepared for the Florida weather, but they pushed on, not for any glory or recognition…but, like we all do—for the cause,” Morgan said.

The Brotherhood Ride is a non-profit charity organization, which consists of Firefighters, Law Enforcement Officers and EMS personnel (and their supporters) who ride bicycles to honor emergency first responders who have died in the line of duty. The mission is to provide emotional and financial support to the families on or near the anniversary of their death.

This year, on September 7, in the Washington D.C. area, the cyclists made a stop at the Pentagon. During the day, the group were honored with a fly over by U.S. Customs and Border Protection Air & Marine, facilitated by one of the riders, Federal Agent Timo Bennett.

The cyclists make the 22-day journey, supported with Police and Fire Department escorts and First Responder-sponsored rest stops. The Order of the Elks of the US sponsor the rides, providing dinners, breakfasts and overnight accommodations at their lodges for the bicyclists to minimize costs of the ride for the non-profit. This allows the Brotherhood Riders to funnel most of the funds they raise for outreach, instead of ride expenses.

“It’s nice after a long day of riding, sometimes in the heat and rain—to receive a warm greeting, Sometimes the news media are there, sometimes city leaders, and first responders and community supporters; and we are able to meet with families of the fallen at the Lodge; then after fellowship with the families of the fallen and other first responders, we get some rest before another day on the road,” Morgan said.

“Because of the Elks Lodge, our cost per rider stays way down–so when we stop to meet with families of the fallen–we can actually hand them an envelope with money as we assure them that the sacrifice of their loved one and their own sacrifice is not forgotten.

”And this year we are especially thankful for the show of support and the Dog Tag Necklace gifts from Point 27. When I presented them, the first responders immediately opened the gift bags, noted the cards from David Dodd with Point 27 and from Rick Johnson, and immediately put the necklaces on themselves or on their bikes. It sort of gave me chills to see it and gives me chills now remembering their reactions. Thank you so much, Rick Johnson and Point 27!”