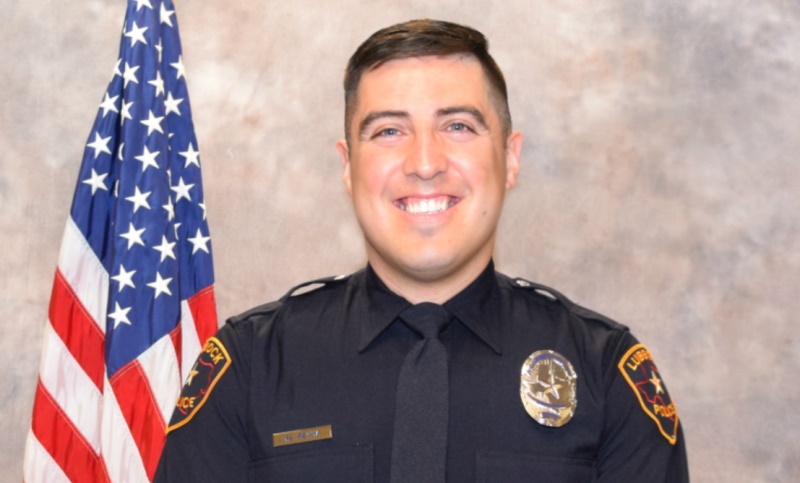 Point 27, an Atlanta-based global nonprofit, has sent gifts of Thin Blue Line scripture-inscribed dog tags called Shields of Strength to the Lubbock Police Department to honor fallen LPD Officer Nicholas Reyna who was struck and killed by a vehicle in the line of duty on January 11, 2020; and gifts of scripture-inscribed Folded Flag Pendant Necklaces for his family members.

The Thin Blue Line dog tags are engraved with:

Matthew 5:9 – “Blessed are the peacemakers, for they will be called children of God.”

Folded Flag Pendant Necklaces for family members of the fallen officer, engraved with:

US (Ret.) Army Col. David Dodd serves as director for Point 27. Dodd commanded a battalion of the first troops deployed to Afghanistan following 911. He wore a Shield of Strength inscribed with Joshua 1:9 next to his government-issued dog tags, and he equipped each of the soldiers in his command with a Joshua 1:9 dog tag before they deployed.

Dodd says he hopes the scripture on the Thin Blue Line Shields of Strength encourages law enforcement officers who are making and have made tremendous sacrifice for their communities.

“We are forever grateful for these brave men and women in law enforcement,” Dodd said. “We are presenting Thin Blue Line Dog Tags to the officers who served with fallen LPD Officer Reyna to thank them for putting their lives on the line to protect their community. The dog tag is engraved with a Bible verse and serves as a physical reminder that God is with them day and night as they patrol and protect the streets of their communities. We want them to know we appreciate and value them.”

“For the families of the fallen officer, we pray the scripture on the Folded Flag Pendant Necklaces reminds them that we will never forget their loved ones,” he said.

In 2019, Texas reports 19 fallen officers killed in the line of duty; and in 2018, eleven line of duty deaths. With the help of a growing number of outreach coordinators in states across the country, Point 27 has honored every fallen law enforcement officer (line-of-duty deaths) reported in the past two years.

Every agency and their families has been presented with gifts from Shields of Strength, with  plans to continue the practice in 2020. Ultimately every law enforcement officer in the country will have been given the opportunity of wearing a Thin Blue Line Shield of Strength dog tag.

In 2016, Point 27 sent Thin Blue Line Shields of Strength and Folded Flag Necklaces to the Dallas Police Department to honor the five fallen Dallas Police Officers killed in ambush shootings that summer. The state of Nevada marks the first state in which Point 27 has equipped every officer, beginning with the law enforcement officers who responded to the 2017 mass shooting in Las Vegas.

Dodd served 27 years in the military. During his active military service, he distributed more than 10,000 Shields of Strength to members of the military, national and international leaders. After his military retirement, he founded Point 27 to share the scripture-inscribed dog tags, which encouraged him and his troops, with members of the military and veterans. A few years later, law enforcement officers requested a Thin Blue Line Shield of Strength engraved with Matthew 5:9. Since its founding, Point 27 has awarded gifts of several hundred thousand Shields of Strength, including high volume gifts in partnership with the national organizations: Concerns of Police Survivors (COPS), Tragedy Assistance Program for [military] Survivors (TAPS) and The Gary Sinise Foundation.