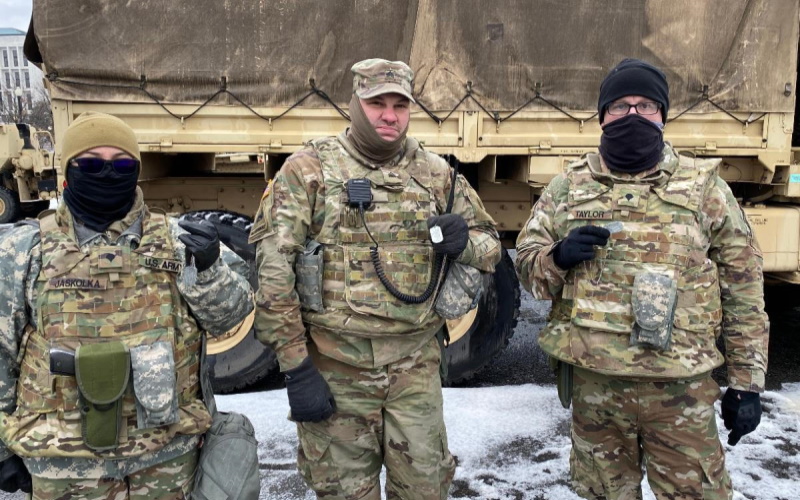 On January 6, a large crowd of people entered the U.S. Capitol to protest certification of the Presidential election. The protest turned violent and the Capitol Police were overrun. Fights between protestors and police officers lasted for four hours. Policer officers were hit with bear spray, pepper spray, CS gas, tables, chairs, clubs, and fists. Some of the protesters were armed and wearing military grade body armor. There were leadership and intelligence failures with the House, Senate, Capitol Police, D.C. Mayor’s Office, and other Federal agencies.

On February 17, on behalf of Point 27, I presented 2,000 Thin Blue Line Dog Tags engraved with Mathew 5:9 to the Capitol Police inside the Capital Building. I spent time with the officers and heard their stories. They are recovering from the protest, they feel like they were treated unfairly by the media, and their morale is low. Initially, I was going to outfit their department with Thin Blue Line Dog Tags last May during National Police Week, which was cancelled due to COVID. God’s timing is perfect. This was the right time to encourage them with God’s Word. They were so very thankful to be appreciated, they were open to the Gospel, and they now have God’s Word hanging inches from their hearts.

“Thank you so much to Point 27 for the incredibly thoughtful gesture of giving us each a dog tag that boosts morale significantly. The events of January 6, 2021, brought us to the breaking point, but the support we’ve received from folks like those at Point 27 has really kept us moving forward to continue our mission.” — Capitol Police Officer Juan Lopez

“Thank you to Point 27 for the Police dog tags. They are a constant reminder that there are good people still left in this world and they always have our 6. After the riots here at the Capital on January 6, 2021, the officers here at USCP felt like it was us against the world. Point 27 helped pull us out of the darkness and stand us up on our feet. Thank you once again. Point 27!” – Capitol Police Officer Jarrod Wendorf

On February 18, I presented gifts from Point 27 of 6,000 Dog Tags engraved with Joshua 1:9 on one side and Psalm 91:1-2 on the other side to members of the National Guard, stationed in Washington D.C. These 6,000 Soldiers are providing perimeter security around the Capital. They are from National Guard units from across America. I met Soldiers from Oregon, North Carolina, Missouri, California, New York, and Virginia. They deployed on short notice and will remain until a decision is made that they are no longer required. They are patriotic, strong, determined, and proud to support and defend the Constitution of the United States against all enemies, foreign and domestic.

They were grateful for the scripture engraved dog tags. The following is a quote from a Soldier and an Airman:

“Part of being strong and courageous is to trust that the Lord, and my faith in Him, is my greatest strength. Having Joshua 1:9 engraved on this beautiful dog tag is a way I can keep the power of the verse close to my heart.”

“I enjoy the dog tags. The scripture helps reset my mind away from fear and things of this world. Fear seems to be all around us: fear of COVID, for the economy, for the future. But with my foundation in Christ and with the Spirit of God, and not fear, I can boldly embrace each day knowing where my strength comes from.”