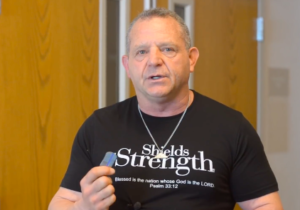 One scripture-based necklace at a time, a veteran-founded nonprofit is spreading Godly messages of support and inspiration to our military, first responders, and Gold Star families.

501(c)(3) nonprofit Point 27 (“Point Two Seven”) was founded in 2014 by Colonel David Dodd, U.S. Army, Retired, in order to share hope and encouragement with thousands upon thousands of members of the U.S. military, first responders, and bereaved families of heroes.

The organization’s name stands for “Point to Christ,” and it has its origins in a scriptural message of strength and hope that Colonel Dodd and those under his command wore on dog tags during their deployments to the Middle East from 2001 to 2011.

After the terrorist attack on the United States on 9/11/2001, Dodd was deployed with his unit to Uzbekistan, Afghanistan, and Pakistan.

While overseas, Dodd encountered a dog tag engraved with Joshua 1:9, which reads:

“I will be strong and courageous, I will not be terrified or discouraged, for the Lord my God is with me wherever I go.”

Dodd contacted Shields of Strength, the small company that manufactured those tags, to order 500 additional dog tags with that scripture. Owner and CEO Kenny Vaughan generously sent him the tags free of charge, and Dodd distributed the tags among all the members of the battalion under his command. Those tags had an immensely positive and uplifting effect on all who received and wore them.

“That verse brought me comfort in times when things were out of my control, and I felt alone. You just feel helpless when there are things that you can’t control, and you have responsibility to accomplish a mission.

“So, knowing that God was with me really strengthened and encouraged me.”

“I saw soldiers that claimed to have no faith, or actually claimed to be atheist, they would take the dog tag and wear it….

“The soldiers, during periods of boredom, would take the dog tag out, and look at it, and, whether they realized it or not, they were meditating on God’s word.

“They would recognize it as truth, and then they would want to learn more.

“So many times I had soldiers come back to me and ask me why I was giving the dog tag to each of them, and asked me about my faith, and I would have the opportunity to share the Gospel with them.”

After his retirement from the Army, Dodd sought to continue to share the positive effects of the uplifting messages on the dog tags, and in 2014 he founded Point 27, with its mission to strengthen and encourage members of the armed forces with God’s Word, engraved on dog tags.

On the Thin Blue Line dog tags is Matthew 5:9, which reads:

“Blessed are the peacemakers, for they will be called Children of God.”

So far, Point 27 has given Joshua 1:9 dog tags to 510,000 military service members, Thin Blue Line dog tags to over 220,000 members of law enforcement, and 29,000 folded flag pendants to bereaved families who have lost loved ones in military and law enforcement.

Reflecting on the Thin Blue Line dog tags, Dodd explained that the purpose of those particular tags is twofold.

“First, it’s a tangible way to say thank you to the officers, and to show appreciation, which is very important right now, because of the fact that they are just being beat up in the media….

“The second purpose of the dog tag is to serve as a physical reminder that we are never alone. God is with us, always.”

The uplifting journey of encouragement for Point 27 is far from over, as Dodd is determined to give these messages of hope to hundreds of thousands more who have served.

“One of our goals is to give a Thin Blue Line dog tag to all one million law enforcement officers in the nation.”

This sounds like quite a lofty goal indeed, but the Point 27 donation-funded, all-volunteer team works with enviable efficiency and a personal touch, to uplift those who have served.

“We have 35 volunteers across America. Most of the volunteers are called Outreach Coordinators…..

“They will contact local police departments, sheriff’s departments in their area or across their entire state. They will find out how many officers they have, and provide the chief’s name and mailing address, and they send that information to me.

“I will write a personal letter to the sheriff or the chief explaining who we are, what we are doing, and the purpose of the Thin Blue Line dog tag, and send the tags for the officers in their department….

“The distribution channel is always ready, and we can fill it as fast as the funds come in.”

Point 27 stands out not only in efficiency of operation, but also efficiency in stewardship of all donations.

“We are very frugal with the money God gives us through our donors. We are extremely careful with what we do.

“A gold standard for a nonprofit is… if they can use 80 percent of a donation towards their mission, and 20 percent for overhead, which is administrative costs and fundraising expenses.

“We are using 95 percent of the donated funds toward our mission, and just 5 percent go to pay for administrative or fundraising expenses.”

Just as it was when he first started distributing dog tags, Dodd has found over the years that those who have received the tags have been touched, moved, and reassured.

“Daily, I’m getting emails, texts, cards thanking us. They are humbling. I’ve had some of the hardest, toughest, strongest men – I’ve seen them tear up just by receiving that dog tag.

“This is a common reaction: An Outreach Coordinator will give one to somebody… and they will say, you have no idea what this means to me. I needed it right now.”

For example, one Colorado detective wrote:

“It’s pretty amazing how something so small can bring so much clarity, comfort, support, and hope to someone in their time of need!! We see and go through so much devastation, especially in our everyday line of work, that when it comes to our personal lives, we neglect ourselves and family when we think we are protecting them!

“Just being able to see the dog tag, immediately reminded me visually of why we do what we do…..then to hold it, take a deep breath and to reflect on the true meaning and support of that simple little dog tag, gave me life back!!!! So many times, just something so simple as my thin blue line dog tag, truly has saved my life physically and mentally.

“God is good and always remembering to take that time, take that deep breath, takes so much weight off of my shoulders…..it’s hard to describe just how uplifting and lifesaving my tag is to me, but it’s been life changing!!!! Thank you for giving us such a powerful representation of God and what we first responders are, all in something so small!!!”

“From a personal stand point, when I received my Tag, it actually brought tears to my eyes. Reading the words engraved on the Dog Tag, ‘Blessed are the peacemakers for they will be called children of God,’ touched me so much that I joined Point 27 and became an Outreach Coordinator in the State of Florida.

“I have presented tags in Florida and Georgia. The response from Law Enforcement has ranged from a Sheriff being brought to tears as well as other officers, to receiving hugs and hand shakes from tough law enforcement officers and family members of Fallen Officers.

“Watching these officers place the tags around their necks and witnessing how much they mean to them is humbling. During these trying times in this country, it means so much to these officers that we are spreading God’s word engraved on a Dog Tag that hangs inches from their heart. Gifting a Thin Blue Line Dog Tag to law enforcement officers, helps them to know how much they are truly appreciated.”

Supporters of Point 27’s mission can easily help by making a one-time or recurring tax-deductible donation at this donation page.

In addition, Point 27 is featuring an exciting raffle of a special law enforcement tribute edition of the Henry repeater rifle.

This rifle features custom engraving and badging, honoring those who hold the Thin Blue Line.

Raffle tickets are available at the Point 27 website under the “Raffle” tab, singly or in groups of three to twelve.

The drawing will be held on January 9, 2022, which is National Law Enforcement Appreciation Day.

Touching again on the anti-police sentiment that is expressed so often today, Dodd told us:

“I think this is one of the most important times in history, that we need to get behind law enforcement.

“It’s so important to let them know the truth. God is with them. They’re not alone….